How to Play Teen Patti

One of the most loved desi card game Teen Patti is also one of the easiest game you’ll ever play. Our team at TeenPatti.co.in has a simple guide written so you can learn the game with matter of seconds.

When we say seconds we mean it, here are the 6 steps to start playing Teen Patti offline.

If you’re playing Teen Patti online lets make it even easier for you:

Watch this How to Play Teen Patti Video on Youtube

Teen Patti game is usually played among 3 to 6 players with a simple 52-card deck. You must know that there is no involvement of the Joker cards in the game. The first thing the players are required to do is contribute their share to the Boot amount. Boot amount is the minimum stake which is decided by the players and every player adds their share into the pot. The pot is later placed in the centre and the game continues.

Teen Patti is undoubtedly a simple game, best-loved by all avid Indian gamers. Learning the Teen Patti sequence is indeed a cakewalk. Although Teen Patti is similar to that of Poker, in Teen Patti, you are required to have all the bets in equal amounts, meaning that once a player makes a bet of 2 coins with another player placing 4, the previous player will have to place 4 additional coins instead of just 2 to the earlier 2.

Teen Patti, being one of the most popular casino games among the Indian gamblers comprise of exciting game variants that include Joker, Lowest Card Joker, Muflis, AK47, 10X Boot, Maatha and so on. Exploring the various Teen Patti variants is super-fun, exhilarating and highly engaging, without a second thought!

The rules in the game of Teen Patti is simple and easy to grasp. The Aces is ranked as the highest with 2 being the lowest. The goal is to have the top 3-card hand and increase the pot before the game ends. Do bear in mind that it is important that you know the various hand rankings before getting into a game of Teen Patti similar to that of the betting rules.

You will be delighted to know that you can play Teen Patti for real money online with Teen Patti live games which are equally exciting as that of the Teen Patti games played at the land-based casinos.

Getting started with Teen Patti

The cards from the deck are shuffled and each player is dealt 3 cards. These cards are dealt face down, so no one really knows what cards they receive until they flip them to check. Players can flip, check and play as Seen. But, it’s not necessary for players to flip and check their cards. Instead, they can also play Blind.

Following are the different moves involved in the Teen Patti game. 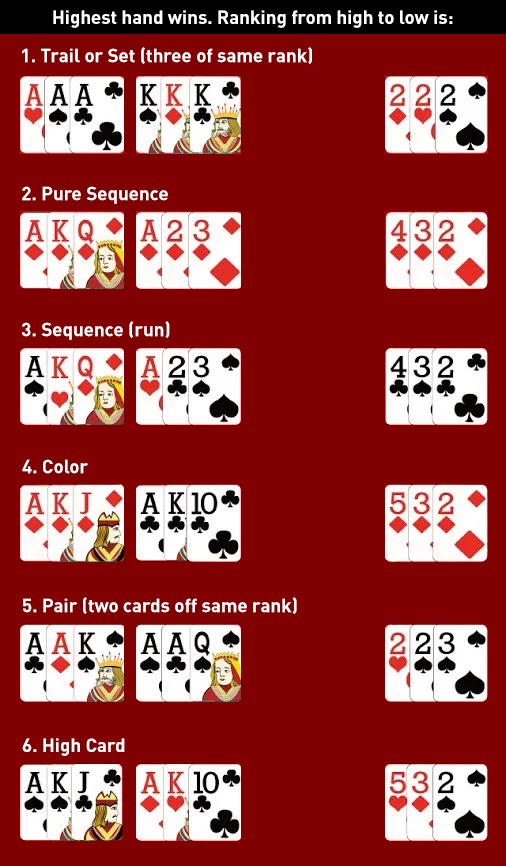